The Nordic countries with a strong track-record on supporting multilateral organisations initiatives, are situated in two regions of increased geopolitical interests and heightened security tensions: The Arctic circle and the Baltic Sea. All the countries are enmeshed in various forms of global, regional and local security networks. Furthermore, with Brexit finalised the Nordic EU-Member states, traditionally more skeptical on relinquishing their sovereignty to EU-institutions, have an increasingly influential role on further European integration and increased cooperation. How can cooperation in the Nordic region, between Nordic and German actors as well as in the European context be deepened?

| Foreign and Security Policy, Democracy and the Welfare State, Event 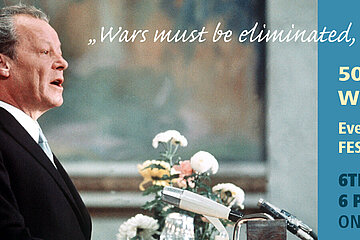 An online commemoration of the 50th anniversary of the award of the Nobel Peace Prize to Willy Brandt. With the participation of Heidemarie…

Refugee migration - a crisis for the Nordic model?