The benefits of economic growth and growing employment have been unequally spread not only throughout society, but also geographically. Many European countries display distinct regional disparities. In many cases, economic growth and employment is limited to certain areas – mostly dynamic urban centres. Meanwhile, rural areas and those that have experienced industrial decline are falling behind. Democratic actors and institutions have failed to solve the underlying socioeconomic issues. As a result, the failure to address these social and spatial inequalities has fueled dissatisfaction with the political and democratic systems in many European countries, contributing in many cases to the rise of rightwing populism.

But what are the answers to these challenges? How should policies in EU-member states and in the EU tackle regional socio-economic disparities? With the project “Unequal Europe - Tackling Regional Disparities in Europe”, the Friedrich-Ebert-Stiftung, together with the Foundation for European Progressive Studies (FEPS), has investigated the extent of regional disparities in Sweden, Finland, Estonia, Italy and Romania.

Not just growth, but equal opportunities

The recommendations outlined in the country reports form a basis for reform of the EU’s regional and cohesion policies. Policymakers need to take a broader approach when it comes to economic and social well-being. The EU should address social and economic inequalities in all their dimensions. Fostering local development and well-being in all areas of a country is not only a goal for economic policy. Rather, it is a matter of strengthening democracy and ensuring opportunities and participation for all.

For more information, interactive maps and all the published report, visit our project site in German and English.

On the outset and in international comparison, Finland has developed one of the wealthiest and most generous welfare states in the world and with low levels of income inequality and high social mobility. A deeper look reveals deepening regional disparities, leading to the observation that in fact there are three Finlands. Following Finland’s post-war industrialization, the rate of urbanization and rural depopulation have been rapid, however the country’s demographic change and stagnating unemployment rate have increased regional inequalities and put increasing pressure on municipalities. Neither the ongoing economic growth nor central government transfers to municipalities and EU-regional funds have helped to balance the regional disparities and inequalities. In fact, the measures in place are hardly sustainable and mostly plaster over the increasing difficulties for the worse of regions to provide services to their population. Thus, a new approach for regional development is needed.

Report in English and Finnish

Stefan Fina is a Geography Professor at RWTH Aachen University and head of the Geoinformation and Monitoring section at ILS – Research Institute of Regional and Urban Development Dortmund.

Bastian Heider is an economic geographer and co-manages the Geoinformation and Monitoring section at ILS – Research Institute of Regional and Urban Development Dortmund.

Pauli Rautiainen is Director of Kalevi Sorsa Foundation and Docent in Constitutional Law, Law and Welfare and Public Law.

Sweden is seen as the archetypal equal and consensual country with a strong and redistributive welfare state, a high degree of job security, low income and wealth inequality and a renowned high-tech export sector. A deeper look reveals that not everyone in Sweden is part of the Swedish success story. Growth, employment, and wealth creation are restricted to a minority of urban areas. Predominately rural and deindustrialised areas have fallen behind. The Swedish disparity report shows that the country has distinct geographical inequalities in terms of growth, employment opportunities and wealth creation.

Uneven growth fueled by high rates of urbanisation and rural depopulation has been further exasperated by the country's demographic change and stagnating unemployment rates have increased regional inequalities and put increasing pressure on municipalities to provide services of high quality for their inhabitants. This calls for policy reforms on the national and the European level. A new approach for regional development is needed.

Report in English and Swedish

Håkan A. Bengtsson is director of the Swedish Arenagruppen to which the think tank Arena Idé belongs.

Stefan Fina is a Geography Professor at RWTH Aachen University and Head of the Geoinformation and Monitoring section at ILS – Research Institute of Regional and Urban Development Dortmund.

Bastian Heider is an economic geographer and co-manages the Geoinformation and Monitoring section at ILS – Research Institute of Regional and Urban Development Dortmund.

In  the  European  Union,  a  social  and  spatial  polarization  has  emerged  between  economically  developed  centres  and  peripheral  regions,  each  reinforcing  the  up-ward or downward movement of the other. These divergences have been fuelled by external factors such as structural change, globalisation, and severe economic crises. A shift is needed from the current paradigm of competition and growth to an integrated European economic and social policy aimed at building protection and resilience in the face of global challenges such as pandemics or climate change.

About the Author
Dr Björn Hacker is Professor of Economic Policy at the University of Applied Sciences (HTW), Berlin. 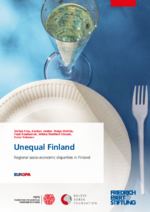