An online commemoration of the 50th anniversary of the award of the Nobel Peace Prize to Willy Brandt. With the participation of Heidemarie Wieczoreck-Zeul, Bundesministerin a. D., and Pierre Schori, former Ambassador, and today’s young politicians Philipp Türmer, Vice-President Juso Bundesvorstand, and Astrid Willa Eide Hoem, President of AUF (Workers‘ Youth League Norway). 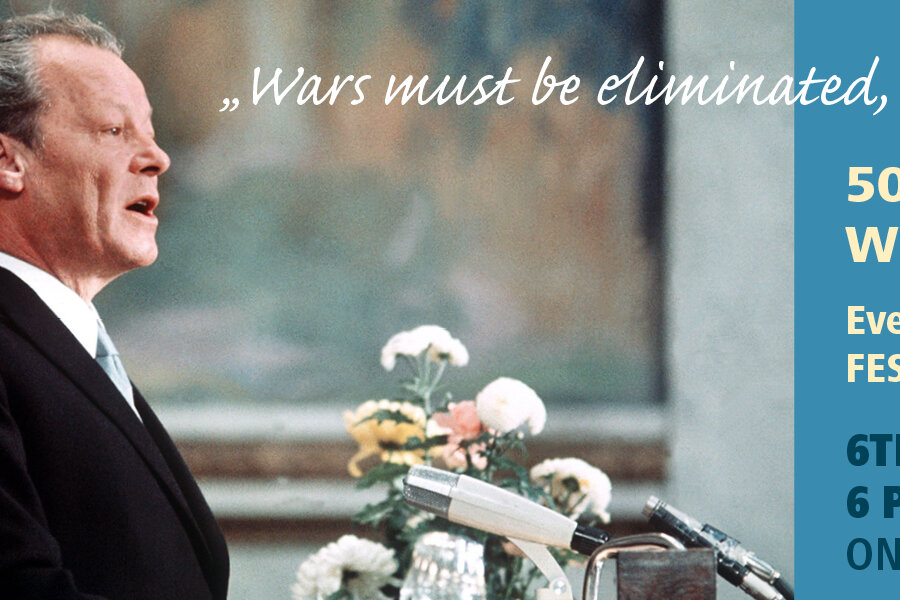 On 10 December 1971, Willy Brandt was awarded the Nobel Peace Prize for his policies that contributed significantly to the détente between East and West. The „Neue Ostpolitik“ of the Brandt-Scheel government opted for cooperation, change through rapprochement („Wandel durch Annäherung“) and the acceptance of the status quo post bellum/war in Europe. In addition to the conclusion of far-reaching contracts, such as the Treaty of Moscow on August 12, 1970, Willy Brandt also sent signals of reconciliation through personal gestures and therefore was able to build up trust. Perhaps the most important gesture was his kneeling in front of the Monument to the Ghetto Heroes in Warsaw on December 12, 1970.

The social-liberal government and Willy Brandt personally were severely attacked for this gestures and politics. 25 years after the end of the horrific events of the Second World War perpetrated by Nazi-Germany, many people in post-war Germany were still not ready to face the past and their own responsibility. And yet: In the federal election in 1972, the SPD received 45.8 percent of the votes, which rendered impressive support to his political pro-gramme of peace and reconciliation.